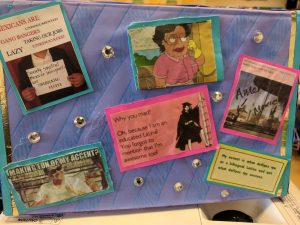 Identity means the qualities of a person that define who they are.Dominant Narrative is a story that people in position of privilege tell about someone who is not.I think it’s important to tell a counter narrative about a dominant narrative because the people that are saying a story in the side of the dominant narrative don’t know what you’ve been through so they are sometimes wrong.People that say a dominant narrative about someone use what they’ve heard but they don’t experience or go through what the person goes through.On the other hand if you tell your own story you’re able to tell your experience and tell the story how it is without any lies.

First of all a Dominant Narrative is a story that people in the position of privilege tell about someone who is not.This has to do with me because sometimes us as people we tell dominant narratives stories without knowing if a story is true.We think we have many power and we tell the story of someone but we don’t really know if it’s true.One of the pictures that I’m going to use for Dominant narrative is a picture with a quote that says Mexicans are immigrants, they take jobs away, etc.I choose this picture because I have heard many people say things like this about Mexicans which is not true because we work hard to get everything we have and sometimes it’s not easy but people in power think the opposite.My second picture that I’m going to put is one about Latinos/Hispanics being lazy, I want to put this picture because people in power think all hispanic/Latino people are lazy and they don’t work but in reality they do because they have a family they have to take care of.

To begin with counter Narrative is a story or perspective that people who are marginalized tell about themselves.This has to do with me because when people in power try to say something about me I could tell my own story and try to prove them wrong, For example when ever people in power try to say something about my Race, Ethnicity, etc and if they’re wrong then I could prove them wrong and tell my own story.One picture that I plan to use that shows Counter Narrative is a quote that says ” My accent doesn’t define who I am or my success” I choose this picture because I’m telling people in power that having an accent is nothing bad and it doesn’t define who I am I was just born with an accent but that’s it.Another picture I plan to use is a picture that shows that Hispanic/Latina women are not always maids.I plan to use this picture because it really shows Counter Narratives because people in power portray women as maids or house keepers but in reality women can do many more things like getting an education , having a good job, or even having a good career.

First of all Identity means the qualities of a person that define who they are.This has to do with me because there’s many identities that make me who I am, for example my favorite teams, favorite colors, etc.One picture I plan to use is a picture of my favorite book.This is an example of identity because that book has different meanings to me and I feel like this books made a huge impact in my life so it really shows one of my identity.Another picture I’m going to use is a picture of the Mexican flag.This picture really describes who I am and it shows people where I was born.Also by using the flag it gives people an idea about my culture, beliefs, what I eat, etc.